Every year an amazing event is held in Allen, Texas, the New Years Double (http://www.newyearsdouble.com/). I’ve participated many years but never tried the double marathon before. New Years Eve and New Years Day the following are offered:

If you participate in Half or Full both days you can combine the medals to create a super medal and there is even a double double if you participate in the 5K each day and THEN do the half/full. I had previously participated in one of the marathons and also done the double halves. This year I decided to try the double marathon. I want to stress how well organized this is. There are multiple emails sent out walking through different aspects of the day well in advance so there is never any doubt what you need to do.

The 5K kicks off around 7:30 while the half/full marathon starts at 8:40 (this gives people time to run the 5K and then the half/full if they are insane 😉 ) with a few waves that are staged every 2 minutes. There were a few hundred doing the half marathon I think with around a hundred running the full (at least for New Years Eve). Packet pickup is offered a few days in advance in addition to being able to collect the morning off which consists of personalized bibs and awesome shirts. A short sleeve shirt for New Years Eve, long sleeve for New Years Day.

The half and full people start together and the course is a 6.55 mile loop around Celebration Park then out along some walking paths through Allen with some nice scenery. The course has police support at any roads and is well sign-posted so you know where you are supposed to be going along with mile markers.

This means for the full marathon you run 4 loops. It also means often you are running in opposite directions to people multiple times. This is actually awesome. You start to get a real comradary with people waving and cheering on as you see them multiple times. Obviously the 3rd and 4th loops there are less people on the course as most of the half marathon people finish.

The course is pretty much flat with very minor inclines and declines a few times. As you can see it’s basically 600 ft of elevation gain (no idea why I have different numbers the two different days, it was the same course 🙂 ). You should be able to run a good time on this course. Obviously those the time of year it’s pretty cold!

You don’t need to get there much before the start. I got there about 8:00 and sat in the car till 8:30 where I used the restroom quick and then lined up for the 8:40 start. It’s very well organized and everyone is super friendly. For New Years Eve the starting temperature was about 40 going up to nearly 60 so I had a throwaway t-shirt over my thermal long sleeve. I ditched the t-shirt at about 2 miles. I had my waffles and gu’s with me and on the course about every 2 miles are aid stations with Water and Gatorade (lime). There are also port-a-potties scattered around the course at the same locations.

Because I intended to repeat the marathon the next day I wanted to take it very easy to try and minimize aches and pains so ran at a comfortable pace however I actually was going pretty fast. With about 6 miles left to go my right hip was giving me some pain but was able to run through it. In the end I came in at 4:16:10 and was actually 1st in the Clydesdale category (and with my gear on I was 196lbs despite recent weight loss). I also would have been first in my age group! 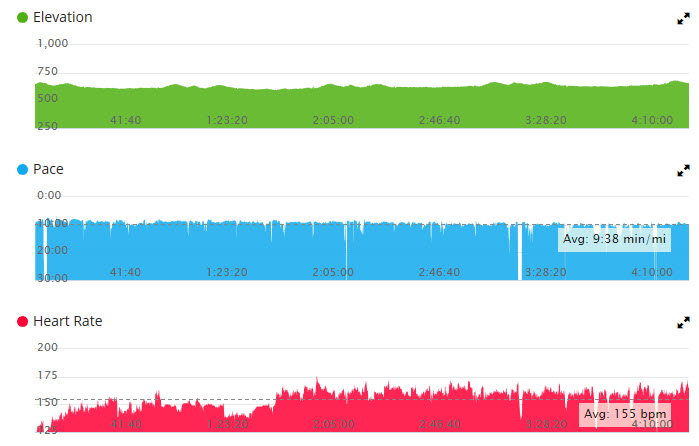 I got a cool glass (because of the number of categories and the number of people that enter you gave a good change of getting glassware!). At the end there is water and snacks.

I got home and my hip was hurting so I did some stretches, used a roller and sat in a hot bath with Epsom salts. I pretty much would have done anything to try and minimize pains and soreness thinking of repeating the next day. Chicken sacrifice was not out of the question if I believed it would have helped. For dinner I had the meal I normally have Friday night, Grimalid’s pizza and 4 ounces of cake batter frozen yogurt with scoop of kit-kat, scoop of crunch bar and squirt of caramel 🙂 2000 total calories of goodness 😉 That pizza is all mine and I always eat it all AND some of my kids cheese pizza 🙂

I didn’t sleep well and woke up at 3am. Sore and in pain but figured what the hell. Let’s try 🙂 Worse case I’ll have to walk it all which would take about 6.5 hours. I worked for a few hours then got ready and everything was the same as the previous day except I was sore and hungry and tired.

I actually managed to run for the first 10 miles about 5.5 mph but just after mile 10 my right knee felt like something was ripping inside. Now I should take a step back. I wear these knee sleeves and as soon as the run started the one on my right knee slipped down to just under the knee so it was just tight just under the knee but I couldn’t pull it up because of the thermal leggings. As it turned out it was basically putting pressure on my knee which I think caused the problem. My hip also started to hurt. At this point I had to walk. The whole rest of the way….. 16 miles or 4 hours at 4mph. Ugh. Andddd, it was about 35 degrees the whole time with an icy wind. Misery. I suspected the day was going to go badly and so instead of music I was listening to The Martian audio book so that helped 🙂 I tried to run occasionally but after about 40 steps my knee felt like was tearing again and in the back of my mind was the thought that I had to start my IRONMAN training and couldn’t risk any serious injury.

In the end I limped over the finish line 5:42:45, ugh 🙂 It’s interesting it shows only 30 finished. I know more than that had signed up so either they didn’t finish or didn’t even start! It was really cold and I suspect there were people who did the previous day who felt like me and did the sane thing and stayed in bed 🙂

But I did it and got the outer medal and a special plate that attaches them together to create SUPER MEDAL!! It is AWESOME! I’m pretty sure I could use it as a weapon.

It was a very hard two days but it’s so well organized, the people are so friendly, you really get to interact with other runners because of the way the course is laid out and that helps keep you going. I love the shirts, the glassware and my mega medal. I highly recommend this event.

I think next year I’ll try the double-double with 5K and the Half followed by 5K and the Full. Two marathons in a row is a killer but who doesn’t like a challenge 😉

My name is John Savill. I'm an ex-Brit now living in Texas. I have three kids, and an amazing wife. I've trained all my life and am currently working towards improving my Ironman times while maintaining weight training. I'm an IT nerd by day and have written a number of Microsoft technology related books and training courses. For more info see my first post at https://theironbrit.com/2017/01/22/history-iron-brit/.